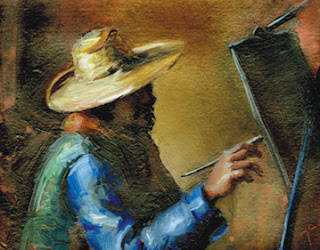 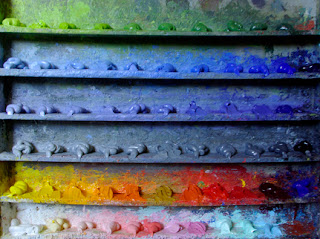 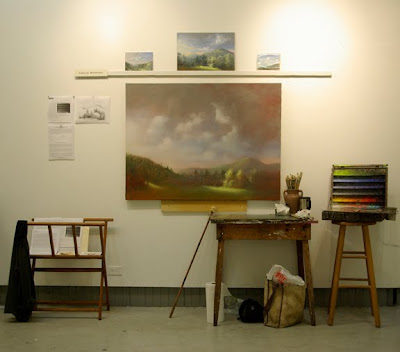 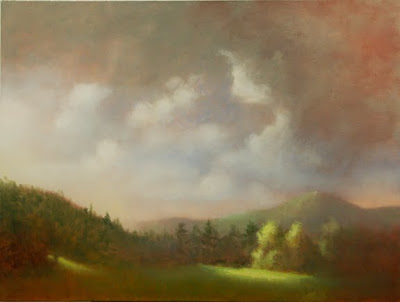 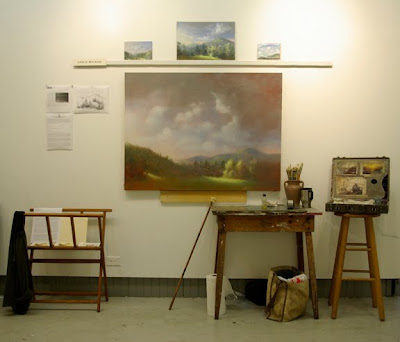 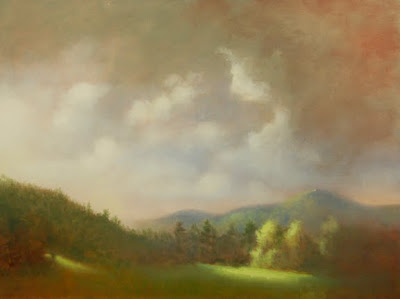 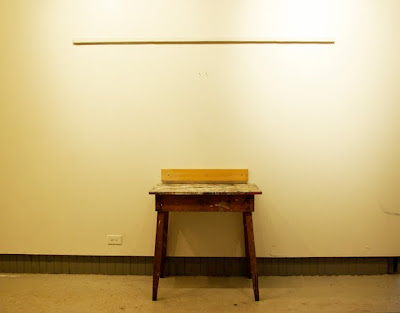 To be continued...
Posted by Leslie Watkins No comments: 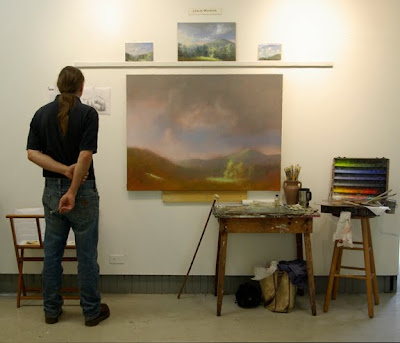 Norfolk Artists and Friends is having it's third annual exhibit at the Battell Stoeckel Estate Gallery. I decided to paint a large picture, 3' x 4' of the quintessential view of Norfolk from Station Place (in front of Iron Bank) looking north towards Haystack Mountain. I am in the process of painting the picture "live" at the gallery, during these two days of the exhibit, from studies done en plein air just before sunset. The view is one of the many wonders of this beautiful town, worthy of the attention of any of the great Hudson River School painters. When I was last on site painting I watched in awe at the intense and fiery sunset as it slowly developed and then faded, casting spectacular light effects across the town meadow, I felt incredibly fortunate to live in a place that honors and showcases such an amazing view from the very heart of it's beloved town.
As with many other towns the question of "improvement" has come up again recently here in Norfolk, with ideas like constructing a boardwalk to make the town meadow accessible, possibly creating a public park, finding an area for extra parking, or even an ice skating rink. I hope that the people of Norfolk remain sensitive to the natural beauty here that certainly needs no improvement, and that they keep in mind that if this town meadow is altered, it could become a too obvious reminder of what happens when so called "improvements" go wrong.

The following posts will show the painting as it develops. 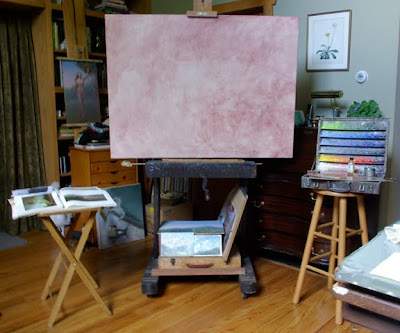 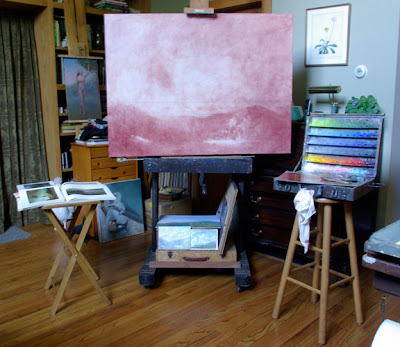 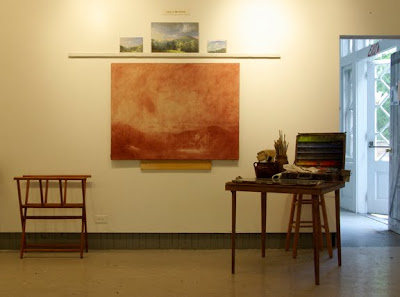 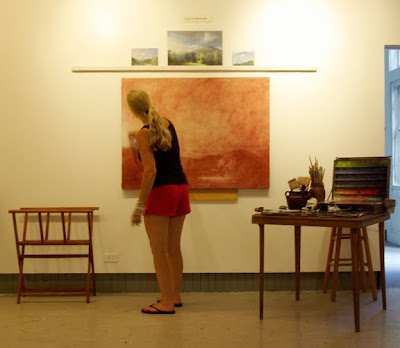 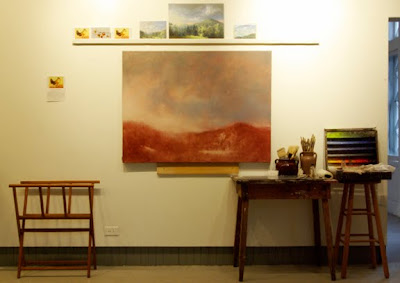 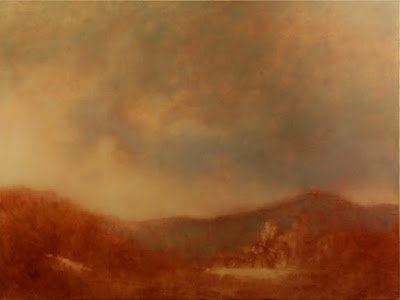 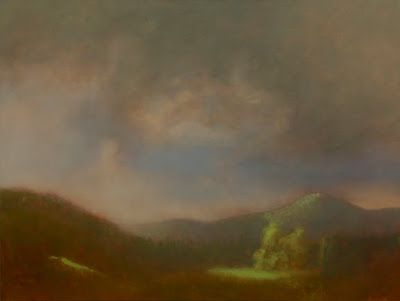 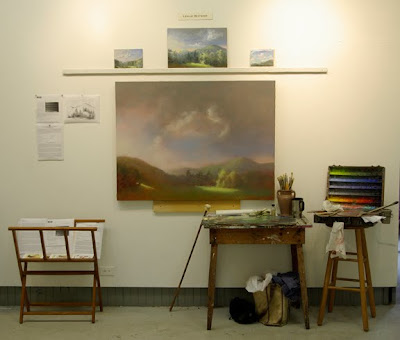 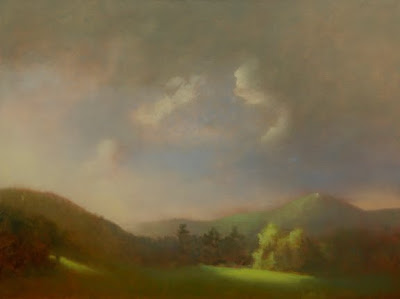 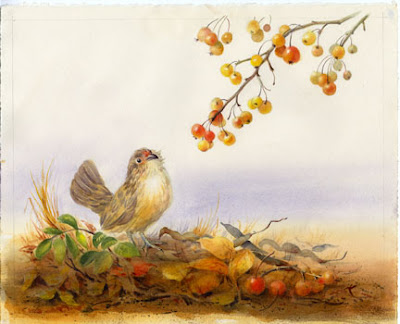 I adjust the values, and add finishing details. The foreground is further enriched with color and texture. My main concern is to establish subtle changes in value and hue to create the spatial dimension relative to each of the subjects in the picture.
Click Here to Bid
Posted by Leslie Watkins No comments: 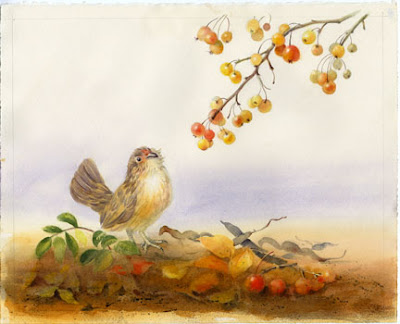 I pull the foreground forward with a unifying wash, and add texture, being careful not to let the foreground upstage the bird. I add shadow to the branch and crabapple stems.
Posted by Leslie Watkins No comments: 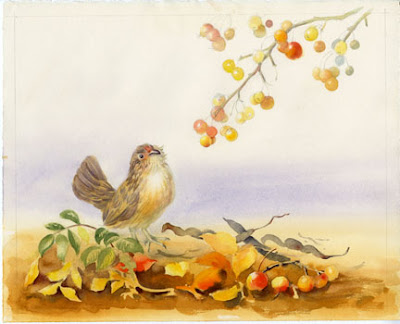 In the foreground, I add texture, color, darker accents and foliage. Using the brush I draw additional details on the bird, and increase color tones on the crabapple branch. I'm working all over the picture at once, so I can see how things are shaping up relative to one another.
Posted by Leslie Watkins No comments: